Fear and Loathing in Las Vegas?

“Fear and loathing in Las Vegas?” Not bloody likely! And by the way, Hunter S. Thompson was missed at the Marijuana Business Convention (MJBISCON) held Nov. 13-15 in Las Vegas, Nev. 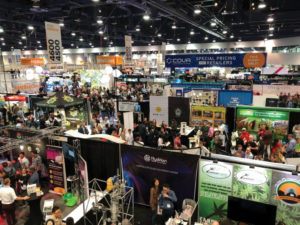 A bird’s eye view of the MJBISCON in Las Vegas. Courtesy photo.

Coordinated with the opening of MJBISCON,  Las Vegas declared Marijuana Week in the city. That’s pretty incredible considering that seven years ago the first convention drew 400 believers, and this year drew 27,600 attendees to a convention floor containing over 1,000 exhibitors. All 50 states were represented along with 70 countries.

This year was different from last. Canadian companies dominated in 2017. This year, American entrepreneurs came out in force in numbers, but light in financial resources. Most American companies are still held privately due to a lack of financial support. The cause of this dearth of capital is a result of federal drug laws that designated marijuana (and all cannabis) as a Schedule 1 drug with no medical benefit. This results in the Justice Department declaring banks would be in violation of banking regulations if they accepted accounts having anything to do with cannabis. This, in turn, cools the ardor of the venture capitalist wishing to invest in this industry. That is beginning to change as is evidenced by several venture capital companies attending the show.

It appears our new Congress may see fit to permit banking. This will encourage major capital investment and will see marijuana industry pioneers going public. We will see mergers and acquisitions taking place across the board and companies becoming vertically integrated.

We now know for certain the medical benefits of cannabis. The FDA recently approved The first drug comprised of an active ingredient derived from cannabis that treats some forms of epilepsy. CBDs in all its medical forms deserves much of the credit in raising the public awareness and evolving attitudes. Marijuana research reveals there are 120-plus compounds in the plant, which when combined in various ways target a multitude of health problems from simple pain to otherwise untreatable cancer. Compounding combinations utilizing both the THC side and CBDs is called the “entourage effect.” Which simply means the remedy contains more than one compound of the plant.

Research such as this is just beginning in the U.S. due to the Schedule 1 drug designation. By contrast, Israel has 50 years of doing research and breaking down political barriers. Canada has 19 years with legal medical marijuana.

Already 33 states have some form of medical marijuana and in 10 states recreational marijuana is now legal. With a Democratic House of Representatives we may see cannabis (both marijuana and hemp) federally legal and subject only to the wide variety of state and local laws. All of these differences will be sorted out economically including taxes, cost of production and political anxieties.

The economic stimulation from the cannabis industry is similar to the run up of tech stocks. Several hundred thousand new jobs have already been created. The industry mavens suggest the valuations of these companies will increase 10 times in the next three years. If there is anything that shows the magnitude of these changes, one has only to look to Coalinga, Calif., where a prison was shut down and is now a marijuana growing facility. Karma catches up again!

Here’s the bottom line: cannabis (marijuana/hemp) is on the rise. Cannabis companies from an investing standpoint however are problematical. Before jumping into the broader market stick to the Canadian companies. Several such as Canopy growth Corp., Aurora cannabis, and Aphria  are the current leaders in the industry. Many other companies may fall by the wayside. Others that have a unique niche will survive as an entity or will be merged or acquired by the major players. Two sources of cannabis industry information that I use are 420intel and New Cannabis Ventures.

Here’s the best part: opening the doors to cannabis both as a commodity and a crafted product, shutters the doors on moralistic law enforcement.

Whatever your interests, either medical or recreational or simply investing in the hottest equity play since tech stocks, I wish you the best.