Everything you need to know about ultrasports (part 1)

Growing up in the ‘80s, it seemed Ironman triathlons were king. We watched them on TV, talked about them in school and had our favorite athletes, much like baseball card collectors. Mine was Mike Pigg, for reasons that seem unclear to me now (maybe the name). There were epic battles, won and lost at the very end. There were long held rivalries and heartwarming acts of compassion. Blood, sweat and tears were around every curve.

I’m sure today’s ironmen and women are equally great, maybe better, but perhaps because of the much larger field of competitors, it’s harder to establish yourself. It’s also harder to repeat with the toll ultrasports take on the body — back then everyone trained for Hawaii once a year, and all other competitions were preparation. Anyway, today’s triathletes don’t share name recognition with the likes of  Mark Allen, Dave Scott, Paula Newby-Fraser, Scott Tinley, and Scott Molina. Today, if you google famous Ironman triathletes, you’re likely to get a celebrity chef or a number of Hollywood stars who merely finished an Ironman. 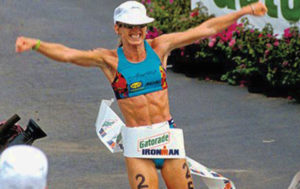 Let’s define an ultrasport here as any event longer in duration and energy expenditure than a marathon and requiring little in the way of specialized skills — bicycling, swimming, running, rowing or paddling, for instance. Newer events like skimo (ski mountaineering) races, where people are basically running across the Alps with skis on their feet, blur the lines, but for the sake of semantics we’ll let expeditions requiring technical skills remain just that: expeditions.

Currently, we are experiencing a blossoming of ultrasports unrivaled at any time in history, with new events being added on a regular basis and an imagination to the invention of new events that’s unprecedented. But before we talk about the present or dive into the past, let’s get back to everybody’s favorite subject: the ‘80s!

Hawaiian Ironman, RAAM, and Outside Magazine

Of course, there were ultra events long before there was Gorbachev and hair bands, but things started changing in the ‘80s with Outside Magazine being founded in 1977, the Hawaiian Ironman in 1978 and the Race Across America in 1982. These are no small things when you recall that sports coverage from the leading sports publication of the times, Sports Illustrated, was limited to what they called the “Top 5” sports and select Olympic events, mainly ones that the U.S. dominated. We were starving for more.

Along come the epic Ironman battles, people bicycling coast-to-coast in under 10 days (barely slower than Greyhound in those days), and a quality publication to carry the events, the training and athlete profiles — it is easy to see the mountain of enthusiasm that enveloped all three of these things.

The classic Ironman rivalry was that of Dave Scott and Mark Allen, but it was important to remember that there were always a periphery of four or five notable characters that on a good day could overtake either of them. In fact, a flat tire or leg cramp could sometimes determine a race. When Allen first came to Hawaii as a lifeguard from San Diego just hoping to be in the top 100 competitors, his first words to defending champion Scott while pedaling up to him on the bike leg were allegedly, “What do you say after this bike ride, we go for a run?” Then his derailleur broke, leaving him in the lurch. It would be a few more close calls and mishaps before the scales would tip in his favor.

There is classic footage of the two at the last aid station sharing a cup of water while running for the finish. They confessed to being in altered states of consciousness — they both realized the battle was within themselves and not with the other. Then there was the “Crawl of Fame,” where Julie Moss (Allen’s future wife) collapsed in sight of the finish line and was crawling for it when she was passed by Kathleen McCartney less than 10 yards from the line (later she appeared on TV to prove she was alright and prevent the kind of public outrage football concussions are receiving now). Moss was a 23-year-old in borrowed clothes challenging the sponsored and accomplished McCartney. Sadly, there are too many heart wrenching stories to do justice to them here.

It is said that defending the World Championship Ironman is one of the hardest feats in sports, and many cite Scott and Allen as the biggest winners with six titles apiece. This is erroneous — South African Paula Newby-Frasier won eight titles at the same time. You see, the battles were amongst the men, while, yawn, “Newby-Frasier wins again,” was a common utterance.  OK, technically, Scott and Allen won time-wise, but all of this will change in the future as women start winning some ultra events outright —kicking all the men’s butts!  Stay tuned.