The Sandpoint City Council voted Nov. 3 to reject a rezoning request by Litehouse Foods, which sought to sell a north Sandpoint property for housing development.

Located on the southeast corner of Great Northern and Woodland Drive, Litehouse officials viewed the land as a potential solution to the housing and workforce crisis affecting local businesses. However, council members were hesitant to make an over-hasty decision that could impact local manufacturing businesses, many of which have plans for expansion. 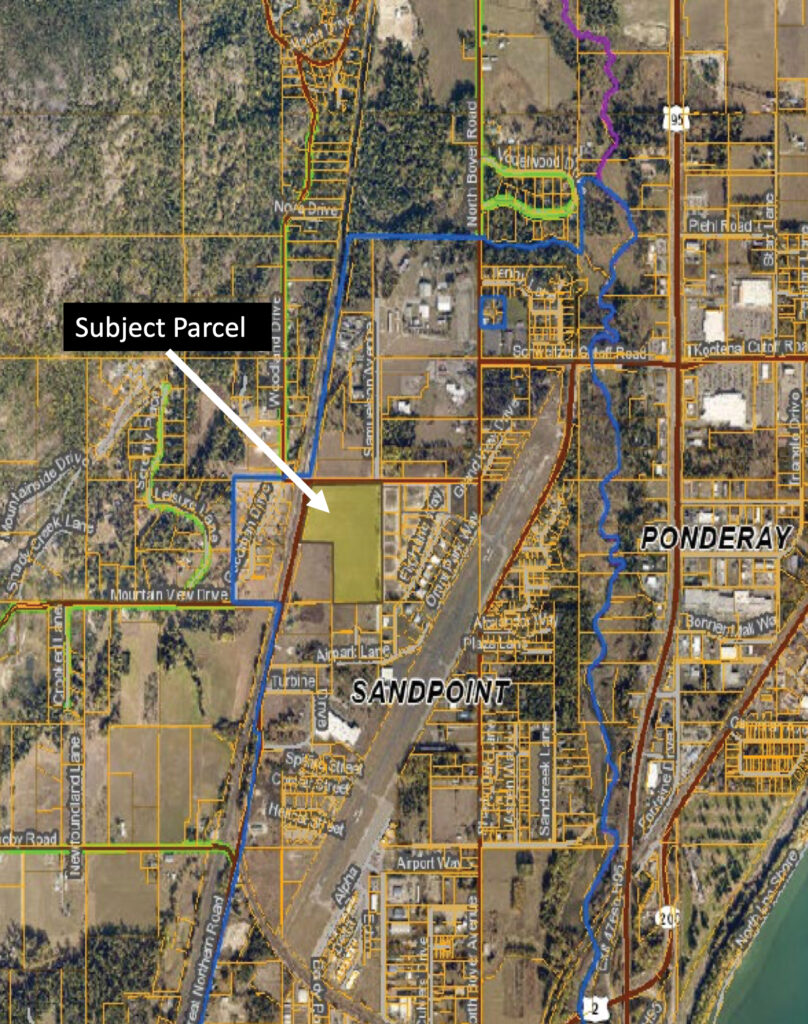 A map of the proposed development near the Sandpoint Airport. Courtesy image.

“There is undeniably a current need for more housing, but that current need must be balanced with the need for industry growth and expansion,” Councilman Joel Aispuro said.

The decision was a rare rebuttal to the Sandpoint Planning and Zoning Commission, which recommended approval of the application. However, council members feared taking drastic action in rezoning the land without the benefit of a land use study. Several council members acknowledged the vote was a difficult call.

“I will openly apologize to our Planning Commission,” said Councilwoman Deb Ruehle. “I rarely vote against their recommendations, but I feel like we can slow this down and do a better job.”

The council considered two separate proposals during the Nov. 3 meeting. To move forward with the housing plan, Litehouse required a rezone from Industrial General to Residential Multi-family. And to authorize that rezone, Sandpoint’s Comprehensive Plan map requires an amendment redesignating the 25-acre parcel from CA Industrial to CA-3, which allows for higher-density housing through smaller lot sizes, attached and detached multi-family units and more.

Council members had to weigh two competing interests: the need for additional housing versus the need for industrial land.

“There’s certainly a need for more housing of all types, but certainly more housing that reaches that lower end of the market — what we would consider workforce housing,” said Daren Fluke, interim city planner, in his presentation to the council. “There’s also a need for industrial land. You want to have a place for businesses to locate and grow. And industrial land is a relatively rare commodity, not only in the city of Sandpoint but in the broader regional context as well.”

As for forthcoming housing, Fluke said there are now 1,006 total estimated housing units in the pipeline with a strong likelihood of being completed.

In his presentation on behalf of Litehouse, Jeremy Grimm of Whiskey Rock Planning and Consulting said that while housing in the pipeline is all well and good, constructed housing is the only thing that ultimately matters. Many projects spend years in construction limbo. And with relatively few units available for middle-income workers, 47% of Sandpoint residents pay more than 35% of their income in rent. As for mortgages, 37% pay more than 35% of their income.

“The net result is a housing crisis,” Grimm said. “This is crazy to think that this many people are struggling … with the cost of housing, and I would attribute it all to a lack of supply.”

According to Kelly Prior, president and CEO of Litehouse, the land proposed for rezoning was purchased in 2005 with the intention of building a new manufacturing facility. In part because of workforce availability and affordability, the company determined the manufacturing plant was no longer feasible. So instead, they hope the land can instead relieve another pain point: workforce issues. The company has 26 open positions that have gone unfilled for over a year — 10% of its Sandpoint manufacturing workforce — with starting wages of $17 an hour.

“Inflation is certainly real,” Prior said. “We’ve had to increase our prices to the consumer to pay for the increased labor. If you haven’t noticed, your salad dressing is more expensive on the shelf today than it was six months ago. But from a competitive standpoint, we can’t raise prices as quickly as the labor rates and housing costs are increasing, or we will lose business.”

Prior added that Litehouse is undergoing contingency planning to transfer production out of state if local issues are not resolved quickly enough.

In council deliberations, several council members wanted assurances that the housing produced would be affordable to low- and middle-income workers.

“So far I’m not seeing anything a server or someone who works retail can afford,” Councilwoman Kate McAlister said. “If we sold our house in south Sandpoint, we’d make a lot of money, but we’d never be able to live here. We’d have to move.”

Grimm replied that while there were no guarantees, higher-income housing would likely be situated near the lake in Sandpoint — not on the north end of town. And ultimately, higher inventory would lower housing prices for everyone.

Following a public comment period, the City Council ultimately decided to reject the proposed Comprehensive Plan amendment and subsequent rezoning request, citing a lack of data indicating how much commercial versus residential land is needed within city limits. Councilman Joel Aispuro said that such a study would be conducted within a year as a part of the Comprehensive Plan update.