With many conflicting interests at play from downtown business owners to employees to pedestrians and bicyclists, officials have struggled to find a system that satisfies every group. On Wednesday, Sandpoint City Council members took another stab at reaching compromise by passing a series of parking revisions. The changes include revised free parking times, a new city committee to recommend tweaks and an enforcement system to punish scofflaws. 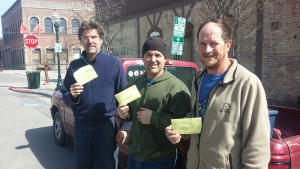 Three construction workers at a downtown shop display the true cost of a remodel in Sandpoint. Photo by John Ford.

“I think this addresses a lot of the concerns we heard from the public,” Mayor Shelby Rognstad said.

Under the new system, downtown Sandpoint streets are reconfigured to allow for two-hour, three-hour, four-hour or 24-hour free parking. According to Rognstad, the designations are strategically selected based on the need to open parking spaces.

“We want to encourage high turnover in [some areas] so we can provide more parking for the public,” Rognstad said.

City employees, for instance, can count on 24-hour free parking in the city parking lot. This eliminates the need for the so-called two-hour shuffle, where employees moved their on-street-parked cars regularly to avoid being ticketed. Likewise, locals can leave cars parked downtown and walk home after one too many at the bar.

Hot parking locations like First Avenue or Cedar Street, meanwhile, retain two-hour parking. The idea is to free spaces and needless frustration for downtown shoppers and diners who previously struggled to find parking.

Some sections of street, particularly along Pine Street and Fifth Avenue, are designated no-parking locations. According to Rognstad, this is largely to ease the jobs of city snow plowers during the winter.  Finally, a handful of 15-minute loading zones are scattered around the revised map.

The new parking system was worked out with the help of both city staff and the public. Residents turned out to two public workshops, offering their feedback and suggestions. At the council meeting, public response was largely positive.

“I want to thank the mayor and the council for the proposal plan—I think it will be a huge improvement to downtown,” said business owner Kevin Kluender, who recommended adding more 15-minute loading zones and arranging them near fire hydrants to assist the fire department.

The council also approved the creation of a parking committee to shape the system around the needs of the community. The committee of five to seven people will be filled by a downtown property owner, business owner, resident and worker, with remaining spots open to interested Sandpoint citizens regardless of work or residence locations. According to Rognstad, he already has four or five applications, with the full committee to be determined by next month.

Finally, residents who have avoided paying their parking tickets may need to face the music soon. The council authorized the creation of a scofflaw list designed to compel parking ticket payment at the risk of car impoundment.

According to Jennifer Stapleton, Sandpoint city administrator, vehicles with six or more parking tickets more than 45 days old will land on the scofflaw list. A vehicle owner placed on the list will be notified, and if they don’t settle their outstanding fines, the police department will place a boot on their car wheel. If the matter isn’t resolved within another two days, the vehicle will be impounded. Stapleton said the system is similar to those already instituted in Boise, Spokane and Seattle.

According to Stapleton, there are to date 44 vehicles that qualify for the scofflaw list, with one vehicle topping out at 153 unpaid tickets and $9,860 in fines plus $3,825 in late fees owed. The 3,500 outstanding violations—not all of which qualify for the list—total to $127,000 in unpaid fines.

Those with unpaid tickets can take advantage of a 60-day amnesty period. Residents with outstanding parking tickets can settle up with a 50-percent reduction in late fees. Those with large fines can work out a payment plan with the city.