The Cougar Fire was an estimated 6,626 acres and 26- percent contained on Wednesday afternoon, with wind gusts of up to 20 mph near the fire through Thursday, according to InciWeb. 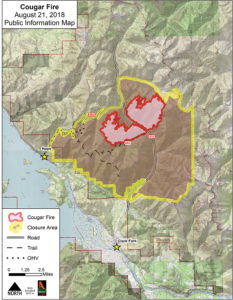 A map of the Cougar Fire. Courtesy USFS.

Idaho Panhandle National Forests officials reported moderate fire activity early in the week, with rollouts and short-range spotting prevalent but fire lines holding in active areas. The fire, which is about five miles from Hope, continues to grow mostly north and east toward Lightning and Rattle Creeks. IPNF also reports that there is a crew in place at the Keeler Warming Hut to maintain the structure protection both at the hut and SNOTEL site.

The Phoenix National Incident Management Team assumed command of the Cougar Fire Wednesday. There will be a community meeting regarding the fire at Clark Fork High School on Thursday, Aug. 23, at 6:30 p.m.

The other most active and expansive fire in the area is the Surprise Creek Fire, near Lakeview on the south end of Lake Pend Oreille. The Surprise Creek Fire was an estimated 2,631 acres Wednesday. Existing roads are being used to establish a fuel break. Those traveling Bunco Road should be aware of increased fire traffic.

There are area closures in effect for both the Cougar and Surprise Creek Fires. Find updated maps on InciWeb.

IPNF would also like to remind everyone that drones shouldn’t be flown in fire closure areas for the safety of fire aviators.

Fire managers throughout the region are utilizing water and retardant drops to get a handle on fire spread, but the use of these resources is limited in smoky skies. The National Weather Service out of Spokane predicts the smoke to stick around our area through Thursday, but forecasts the weekend as a break from the haze thanks to a brief cold front.

Sandpoint saw low 100s on the Air Quality Index scale Wednesday night, which is classified as “unhealthy for sensitive groups” by the Environmental Protection Agency. Still, it was an improvement from early in the week when the AQI reached the low 300s in Sandpoint — “hazardous” for everyone, according to the EPA.

Keep up with changing air quality conditions at airnow.gov.