A conversation with Holly McGarry

The first time I met Holly McGarry was over a decade ago, when I was managing a bar in Sandpoint called the Downtown Crossing. We had a strong live music scene at the Crossing then, with great traveling bands playing every week. I would often see a quiet teenager hanging around on the sidewalk peering inside the open doors and watching everything. She watched the bands set up, listened to them play, watched them break down and load their rigs. 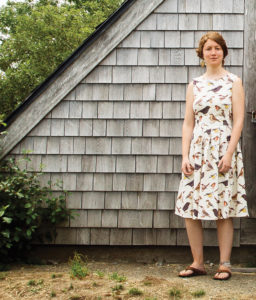 Sometimes I would talk to her while cleaning tables or trying to avoid the banal conversations of drunks inside. I learned that her name was Holly McGarry, and she interested in playing music. The reason she watched from the sidewalk was because she was still a good five years away from going inside, but more importantly, she was taking everything in, learning what sounded good, what didn’t fly, and perhaps filling the well that would eventually lead to her own music career.

Some time later, someone told me that she had an amazing voice, so we booked her for a solo show. At 16 years old, McGarry poured out more soul through her smoky, honeyed voice that I’d heard in years. It’s one of those instances when you realize that someone is doing exactly what they should be doing in life – and that they’re going to succeed.

Flash forward to today and McGarry is well on her way. After graduating from the prestigious Berklee College of Music in Boston, McGarry joined forces with Chris Bloniarz and Ben Burns to form the indie folk band Honeysuckle, and they’ve been seeing some success lately.

Since McGarry is returning to her hometown of Sandpoint this weekend for a quick hello and a show, I thought I’d fire a few questions over to her. Here’s our brief interview.

Sandpoint Reader: You’re headed back for a stint in Sandpoint. How long are you back, and where are you playing when you’re home?

SR: Honeysuckle has been slowly making a name for itself back east. Tell me about some of the successes you’ve been having recently.

HM: It’s been a great year for the band. One of the biggest milestones for us was starting to work with a booking agent. Now that we’re with Crossover Touring, they’re keeping us on the road full time which I think is exactly what we need to be doing. We also have a lot more festivals on the calendar including Mountain Jam in Victor, N.Y., where we’ll be sharing the bill with artists like The Decemberists, Jack Johnson, Father John Misty and John Craigie. Though it can be a controversial topic in the music scene we’ve also had some success with streaming sites like Spotify. Though that could be an article in itself, it’s been very nice to be playing shows in states we’ve never been to and have people come out because they had heard us online.

SR: Are you on tour now? Where are you currently?

HM: I’m writing this from a Marriot in Richmond, Virg., after a relaxing 11-hour drive. Ha ha. We just toured our way down to Tallahassee, Fla., for Word of South music and literature festival where we got to see Blind Pilot and some other great nationally-touring acts. We also played several other quirky house shows and clubs along the way. This tour marked our first times playing in West Virginia, Georgia and Florida – 27 states under our belts so far this year!

SR: Any plans for a new album in the works?

HM: I’ve started writing a handful of songs for a new record. We’re starting to make some demos and work on arrangements. We should hopefully begin recording in earnest this fall. I’ll probably play a handful of new songs while I’m in town.

SR: Your bandmates are either in Europe, or were over there recently, right?

HM: They played nine shows across Germany, the Netherlands and London last month with young guitar prodigy Quinn Sullivan as part of the “Rock n’ the Blues Tour.” While I’m in town they’ll be touring again with Quinn along the east coast. In this band instead of their usual folkie instruments Ben plays the drums and Chris plays organ/keyboards. It can create some scheduling problems, but I think they enjoy getting to play around with another genre. Quinn also has some very interesting musical friends including Buddy Guy who he has toured with since age eight.

HM: Can’t think of anything at the moment. Unfortunately I’m not sure when the band or I will be in town next (fingers crossed for Thanksgiving maybe). Just hoping to see as many friends while I’m home as possible since it’s hard to know when I’ll make it back next.

Catch Holly McGarry at her live show at MickDuff’s Beer Hall on Saturday, April 21 from 6:30-9:30 p.m. To listen to Honeysuckle’s music, stream them on Spotify, or check out www.honeysuckleband.com.