Once upon a time, my brother F.K. arranged a hike into a mountain lake, which several others fell victim to. Fishing King Compton would—and still will—do anything to catch a cutthroat; even walk miles uphill through user-unfriendly places. I’ve been to that lake many times since—that was my first—and I’m not saying there isn’t a trail. But there are places where you have to look for it.

We were extraordinarily hung over at the start. We found bed at 3 a.m. after a fine carouse celebrating brotherhood in downtown Sandpoint. We left for the lake at six. We were 50 miles gone when we realized we had not a single knife between four of us. The immediate question was, “How will we clean the fish?” I’ll let you guess who asked.

After stopping in search of a knife at one of those out-in-the-middle-of-nowhere little  concerns sometimes found on the way to mountain lakes—it was closed—we decided one could clean a fish with a P-38. This is not a fighter plane P-38, but a government-issued folding can opener about the size of an old-fashioned double-edged razor blade. But not nearly as sharp, we were to find out. I will spare you those details. This is just to illustrate how ill-prepared we were. 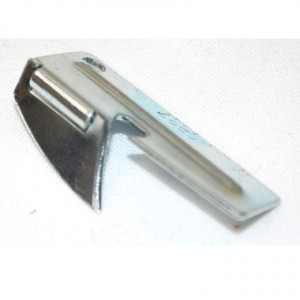 The P-38 can opener; the coolest sounding name for a little hunk of metal.

In our company was a business acquaintance of F.K. from Nebraska—whose name I can’t remember—and F.K.’s crazy friend—whose name I will change to Bob. Bob was of such a nature that should a charging bull moose head his way, he would tarry to get a closer look. He treed bears, brought home any dead critter he came across and once took a live rattler home. I think that’s when his wife left.

F.K. assured us time and again that the lake was “just over that next rise,” which is how we mustered the determination to make our destination. Ripe huckleberries lined the trail, and the lake turned out to be as beautiful as it was distant from the trailhead, which is how our guide survived the trial. Plus, Nebraska hadn’t the energy to chuck rocks, Bob was having the time of his life turning over rocks and I was last in line.

I packed a camera, one I still miss in this digital age; a 35-millimeter Canon FTb with a selection of good lenses. The kit and kaboodle weighed eight-and-a-half pounds, hence the term “packed.” It had a spring-loaded mechanical shutter. When it closed, the world shook. It was like, “Kaboom!”

While I made photos and F.K. caught trout, the business acquaintance slept on a rock in the sunshine and Bob turned over rocks. After a couple hours, we went back down the trail to civilization, such as it is, inspired at just the right moment by the verbalized thought that somewhere out there was a supply of cold beer. 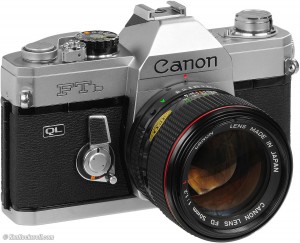 The Canon FTb; maybe not such a cool name, but an awesome piece of machinery.

My favorite lens for the FTb was a 55 mm portrait lens with which I took a portrait of the lake that day, hunkered at water’s edge between halves of a boulder separated by a fall centuries before. I framed the headwall behind the lake and it’s shimmering mirror image with bit of sky above and its reflection at the lower edge of the picture. The sky was blue. Beargrass grew down to the lake. White skeletal trees topped the headwall. And the future, in which I would sit in this place time and again, was formed as the boulder had been: split from the past by a single, earth-shaking event.

It may have been the shutter release.