Animation Show of Shows returns to the Panida 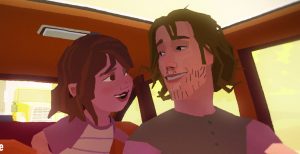 Female empowerment. Parent-child relationships. The primal nature of man. Those are just a few of the subjects tackled in the “18th Animation Show of Shows.”

A collection of the world’s best offerings in the medium of animation, the traveling, curated shorts compilation returns to the Panida Theater for an international smörgåsbord of art and culture. True to form, the visual inventiveness and thematic depth on display in some of these shorts is a testament to the strength of the short film format in the hands of a skilled artist.

Variety is a strength in any compilation, and that’s nothing if not true for the “Animation Show of Shows.” This year’s compilation features entries from Belgium, Canada, France, Israel, Korea, Latvia, Norway, Russia, Scotland, the U.K. and the U.S., with shorts ranging from computer animation to stop motion to painstakingly hand-drawn work.

The series also features this year a mix of family-friendly content and more mature fair. While the thematic variation is welcome for adult fans, it could pose a problem for those who want to bring the kids when the show hits the Panida. Luckily, there will be a convenient five-minute intermission before the more adult-themed content begins. These mature shorts range from a light-hearted look at the nature and common struggles of women—the charming “All Their Shades” from Chloé Alliez of Belgium—to a more disturbing exploration of masculinity and unrestrained id—“Manoman” by Simon Cartwright of England.

As for the family-friendly content, they range from thought-provoking to sweet to charming. Some may already be familiar with “Piper,” which tells the story of a tiny sandpiper hatchling stymied by its fear of ocean waves. The Disney-Pixar short played before the hit Pixar movie “Finding Dory” and won the Oscar for best animated short at the 2017 Academy Awards ceremony. Likewise, it’s hard not to be moved by “Pearl,” directed by Patrick Osbourne of the U.S. Utilizing stylized animation, it tells the story of a father who gives up his dream of life on the road as a traveling musician to give his daughter a stable life, only to find her following the same path years later. “Pearl,” as well as several other shorts included in this year’s series, uses music as an effective storytelling tool to communicate the emotions and themes of the piece.

“The Animation Show of Shows” is rare opportunity to see the best work in an artistic medium that often doesn’t enjoy a wide audience. Curated by industry veteran Ron Diamond, the show is both produced and supported by enthusiasts, with this year’s effort made possible by 550 Kickstarter supporters. Thanks to their efforts, “The Animation Show of Shows” will be seen in 435 screenings in 50 cities in the U.S., Canada, Spain, South Africa and Australia. It’s a welcome showcase for such unique artistic voices, all of whom find human moments in animated images.