‘All You Need Is Love’

The Reunion fantasy Beatles tribute band to play the Panida

A Beatles reunion tour in 2018 might be impossible, but Wayne Coy isn’t one to let that stand in his way.

Fab Four fans of the modern day are just as interested in seeing John, Paul, George and Ringo performing live as audiences 50 years ago. When The Reunion: Beatles Fantasy Tribute hits the Panida Theater this Saturday, music lovers will come as close as possible to an in-the-flesh Beatles reunion. 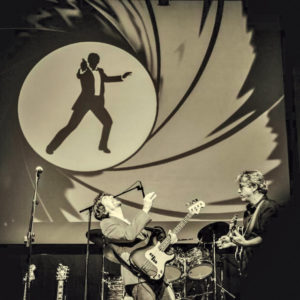 “We decided to do something a little different (from a normal tribute band,)” said Coy, the show producer. “We ask audiences to suspend reality and imagine what it would look like if the Beatles could perform today.”

While most tribute bands learn to recreate the greatest hits and call it a day, The Reunion takes the tribute band concept a step farther. It asks audiences to imagine that The Beatles have reunited in 2018 for a new tour that encompasses both their collaborative and solo careers. Obviously, that’s impossible— two of the Beatles are dead, after all. But once audiences suspend their disbelief, they’ll see a mature, convincing take on the legendary rock band unlike any other.

To that end, the talented folks playing the role of the Fab Four are both musicians and actors, fully inhabiting the voices and mannerisms of their characters. Drew Harrison plays John Lennon, Adam Joel plays Paul McCartney, Nick Bold plays George Harrison and Terry Carleton plays Ringo Starr in a line-up that captures The Beatles’ personalities and unique interplay.

“I just thought to myself, ‘There’s gotta be more than one way to pay tribute to the greatest rock and roll band of all time,’” said Coy.

A fifth member of the team helps bring the lush, orchestral sound of many Beatles songs into the context of live performances. Coy said Tommy Cossentio, the show’s musical director, is essential into maintaining the cohesion that makes The Reunion an authentic Beatles experience.

“He’s the glue that holds the show together,” Coy said.

The Reunion got its start in the Bay Area in 2010 by Got Live Entertainment, a company Coy heads up as president. The show has since earned critical acclaim, and after some cast changes in recent years, Coy believes they have perfected the concept.

“The current cast is the best we’ve ever had,” he said.

Catch The Reunion: Beatles Fantasy Tribute 7:30 p.m. Saturday, May 12, at the Panida Theater. Tickets are $25 and can be purchased online at www.panida.org or at the door.