What the late, great Warren Miller did for ski movies, Thunderstruck Films has been doing for snowmobiling with more than 20 films since 2000. 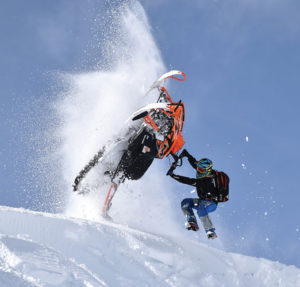 The Colorado-based company helped pioneer the genre of snowmobiling movies with its Thunderstruck films — a series that this year reached 18 installments and with the latest set to screen Friday, Nov. 29 at the Panida Theater.

Presented by the Idaho Panhandle Avalanche Center and showing at 6 p.m., Thunderstruck 18 is currently touring throughout the West in both the United States and Canada. The Panida show follows a premiere in Calgary, Alberta and will be followed by a Nov. 30 screening in Revelstoke, B.C.

Team Thunderstruck specializes in pushing the sport of backcountry snowmobiling to its outer limits with insane hill climbs, hair-raising crashes and death-defying jumps in awe-inspiring locales. Quick-cuts and driving music fuel every Thunderstruck film, amounting to a feature-length feast of super-charged excitement as expert riders show just what can be done with a good sled and no small amount of chutzpah.

Founded in 1996 by rider Jim Phalen, who started with little more than a handy-cam and some friends, the company has since grown into “the only snowmobiling film in the world that incorporates every genre and style of western riding,” according to snowest.com.

The Thunderstruck series has piled up a good number of awards over the years, including “Best Rider in a Snowmobile Film” from Xtremey five times between 2004 and 2008.  A host of more than 20 international riders make up the team, including a few Idahoans such as Riley Jensen-Hoyle, of Island Park; Julio Eiguren, of Boise by way of Australia; Mark Mesenbrink, of Hayden; Sid Huntsman, of Idaho Falls; and John Outhet, of Star.

As the company’s mission statement puts it: “Thunderstruck Films mission is to promote the sport of snowmobiling through the filming of our crazy antics and to hope that no one ever tries to repeat what we do in our films!”

Fair enough, but it’s definitely recommended that you watch those antics on film if you’re a fan of high-energy backcountry motorsports, complete with amazing deep powder sledding and stellar cinematography.