A hometown connection: An interview with Sandpoint’s own Bridges Home

Bridges Home features David and Tami Gunter on a bevy of different instruments, with David’s son Paul Gunter jumping in on the bass guitar and backing vocals as much as possible. Their style is a hybrid of Americana folk with warm Celtic roots. 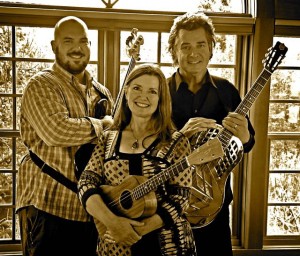 I spoke recently with David Gunter of Bridges Home about playing on the road, the roots of their music and their upcoming show at the Festival at Sandpoint.

Ben Olson: So you’re on the road right now touring. How’s that going?

David Gunter: It’s great. We found this lovely little land in the music world that has been taking us to small town America. To towns with historic venues. We just did one about a week ago in Harrington, Wash. in the Palouse. The Harrington Opera House was built in 1904. It’s a treat—you drive through these towns and you don’t realize that there is a vibrancy that is still alive and well. The people, much like we’ve done with the Panida, have ponied up in terms of time and treasure.

BO: Do you find the audiences more receptive in these settings than, say, in a bar?

DG: Absolutely more receptive. Tami and I cut our teeth and we’re grateful that we got a chance to do the wine bar thing. A turning point was when I started writing again. It was as if the muse said, ‘OK, turn the page,’ and now here are some sorts of different opportunities. Now we do almost exclusively original material or our own arrangements of ancient Celtic songs.

BO: Do you have Celtic heritage?

DG: Both of us do. Tami has a double dose of Irish lineage and I’ve got an interesting mix of Irish, Welsh and English. And a little British Isles. Her’s is a more direct plug into the Emerald Isles while mine was influenced by the American South—the high lonesome Appalachian take on music that came over on the boat.

BO: When did you guys start playing in earnest?

DG: Tami and I started about seven years ago. We started on the guitar and ukulele doing cover tunes. A local, Steve Garvan, was a real catalyst for us to take things in a different direction. He enjoyed what we were doing with the cover tunes, but threw an arm around our collective shoulder and said, ‘If you want to start doing something else, you should be writing original music.’ … As an artist, you’re fortunate if you have somebody that approaches you with that degree of candor. … Sandpoint has been really dear to Bridges Home. They watched us in our first halting baby steps. They watched us do our pratfalls, and certainly watched us launch into every damn musical direction you can try out in seven years.

BO: You’re known for playing a wide variety of instruments between you, Tami and Paul. How did that come about?

DG: It was a coalescing of interests, I think. We started off as guitar and uke and vocals. The next instrument to come in was something I had fooled around with for years—the clawhammer banjo. Fiddlin’ Red Simpson was another example of the right catalyst at the right time. He said, ‘I could show you some clawhammer songs and riffs.’ That sparked the octave mandolin, and as we pulled things in, we started to explore sonically what we could do with original music. … When Paul joined us a year and a half ago, there we had the best bass player in the Northwest, and he could sing, too. He’s my son though, so I guess I’m biased.

BO: How did you get tapped to play at the Festival at Sandpoint this summer?

DG: We played for a couple of Festival functions. The sponsor night dinner and a couple of ancillary things. We also played at this Festival poster unveiling last year with Paul, and Dyno was watching from the perimeter, and she walked over and said, ‘We gotta get you on the main stage.’ Two days later, I got an email from her.

BO: How about opening for Bruce Hornsby? Are you a fan of his music?

DG: I was gobsmacked. I’m a huge fan of Bruce and how courageous he is not only as a musician, but in his career and following where the music takes him. … Tami and I have played big audiences before, but the fact that it’s the Festival, it’s home, it’s Hornsby. The confluence of so many hip things makes this definitely the jewel gig to date.

BO: What is it about Sandpoint that seems to create so much talent in music?

DG: Sandpoint—in the visual, theater and performing arts—is somehow this crucible for talent. It’s been really interesting over the course of 39 years or so, to see how that’s happened. To see how people have flourished artistically. It ain’t a get-rich-quick scheme to be a musician in Sandpoint, but I can’t think of a better place to explore and expand and grow as an artist. It’s a beautiful hard place in Sandpoint.

BO: OK, I’m stealing one of your moves as a journalist. Final thoughts?

DG: Well, I guess back to the Sandpoint connections. I look to people as you would, that were mentors of mine and people who brought me up. People like Charlie Packard. I met Charlie when I was 13 and he took me under his wing and encouraged me as a young musician. He was one of those comrades along the way that I find myself in a similar role now, not only with younger musicians, but those my own age. We all may be on different paths, but we’re on the path. I can’t think of a better place to be on that course than Sandpoint. It either embraces you or chews you up and spits you out. I’ve been lucky. I only have a few gnaw marks, but I’m doing all right.

Catch Bridges Home on Thursday, Aug. 4 at the Festival at Sandpoint’s opening night. 265-4554 for ticket information.