I commend the job that Sandpoint Parks and Recreation did this summer battling goose poop at City Beach. Every dawn after a night of carpet bombing the guys were out sifting sand, raking grass, and scraping sidewalks to ready the beach for the day’s picnickers and sunbathers. Inevitably they fell short at times but, hey, they were seriously outnumbered.

I’m less delighted with maintenance of the trail along Sand Creek. The stretch between Bridge Street and the Cedar Street Bridge is especially attractive with its stone sculptures, period lampposts, ghats, and cottonwood trees, some just now approaching maturity. Beavers like it too, and I wish Parks and Rec took them as seriously as they do geese. After all, they’re easier to defend against. The mesh collars present on most trees seem to do a fine job except that they occasionally disappear and must be replaced. 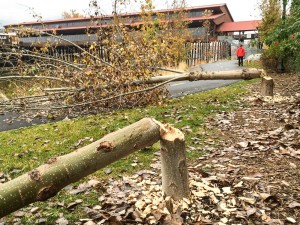 Two weekends ago a beaver attacked one of the largest cottonwoods, injuring it severely before giving up. I called Parks and Rec Monday morning and reported the damage and missing collars. Their response was “I’ll let ‘em know.” The following Friday night he returned and felled a neighboring smaller cottonwood, also missing its collar. By the next weekend Mr. Beaver had removed the smaller cottonwood as a hazard to navigation and returned to drop the larger cottonwood across the trail. Once again I called Parks and Rec on Monday morning, this time whining even louder about the collars. Their response was “I’ll let ‘em know.”

It takes more than emptying the trash and replenishing the poop bag dispensers to keep this trail the gem that it is. I hope to see mesh collars, or some other defense, reappear on the remaining trees before they, too, disappear down one of the ghats into the creek.